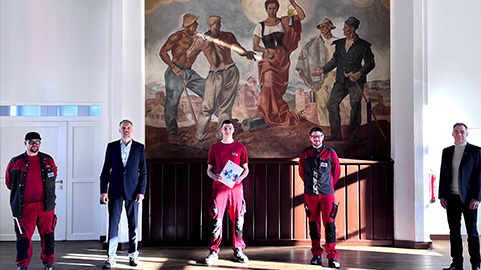 We’re delighted to announce that Simon Hell has completed his vocational training as an electronics technician for industrial engineering with the grade “Very Good” – a fantastic result that the GK Group has rewarded with a bonus payment of 2,000 euros.

“We’re happy and proud to have such a motivated young colleague in our ranks,” says COO Thomas Grünberger, who also warmly congratulated Works Manager Oliver Link, Training Supervisor Florian Fesl and Works Council Chairman Winfried Seelinger on their roles in Simon’s training. An initial internship at the GK Group previously confirmed Simon Hell’s career aspirations – following in his father’s footsteps as an electronics technician – resulting in the now 19-year-old Untergriesbach-native opting for a three-and-a-half-year vocational training program. “The various tasks involved in the job mean that my everyday work is incredibly varied,” explains Simon Hell, who would like to gain experience on the job before perhaps tackling a master-level training program in a few years. Whatever the case, the GK Group remains committed to supporting its youngest members of staff, not only by rewarding special achievements, but also by promoting further education and continued training of all kinds.